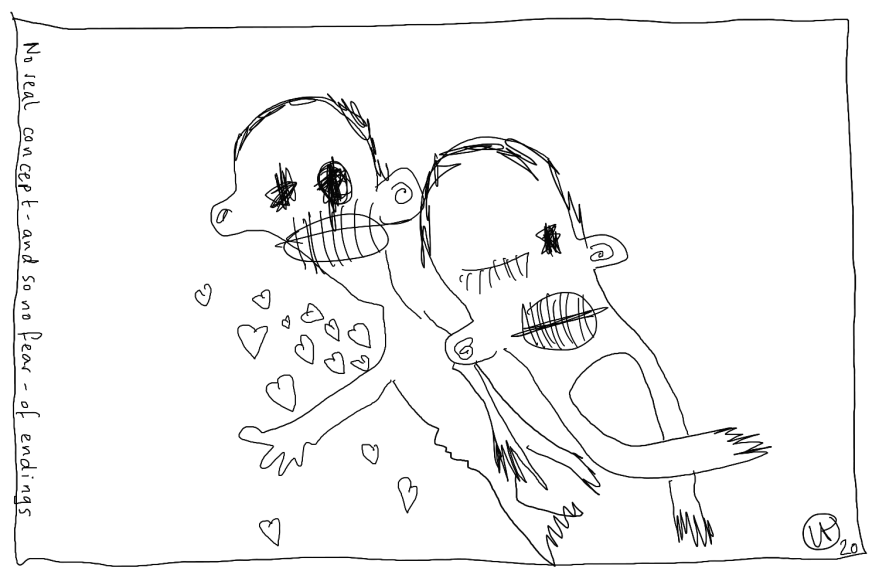 CORA IS SQUATTING on the living room floor surrounded by a storm of paper, tape, ribbon, pens and a card. She is preparing a birthday gift for her best friend Morgan, who is turning five. It is a Teen Titans costume she had me order more than a month ago.

‘Mama, what shall I write in his card?’ she asks me.

‘How about, Happy Birthday?’

She pauses, then starts scrawling. When I walk past her and try to look over her shoulder, she hunches protectively over her work. When she’s done, she hands me the card and instructs me not to read it.

I open it a tiny amount as I slip it into the envelope and I can see it doesn’t say Happy Birthday at all. It says I love you so much.

Morgan and Cora were 18 months old when they first met at a toddler’s gym. It was not an age of great communication between peers, but after some weeks, Morgan’s nanny told to me that he had been singing songs about Cora at home. He had noticed her, and he liked her. She liked him too, and I took her frenzied repetition of his name after we left the gym as an expression of her desire to see him again. We started hanging back in the park after class and soon they broke the firewall of parallel play by sharing blueberries and cheese chunks.

Gym graduated to art class, soccer class and then they started at the same preschool. Cora was enrolled full-time and Morgan came every other day. On the dark mornings of his absence, she faced her abandonment alone: when it was time for me to leave, she stuck on like a little crab, her fingers digging into my legs as she tried to climb me. But on Morgan Days, as they came to be known, she peeled right off. Leaving the house in the morning was a cinch: she stood still as I dressed her, ate her cereal with focus and even brushed her own teeth. Once at school, instead of holding on to me, she picked up her nerve and placed herself next to Morgan among a pile of wooden blocks or at the coloring table.

It was a while before I took their relationship seriously. I had become wise to the fact that in early childhood, everything changes. Food preferences, toilet habits, sleeping patterns, mood swings, favorite toys; fast flux was the new normal, and I was a keen student of this commendable lightness of being. Cora’s affection for Morgan was the first thing that started to outlast every other phase. I began to sit up.

CONTINUE READING ON THE DEWDROP