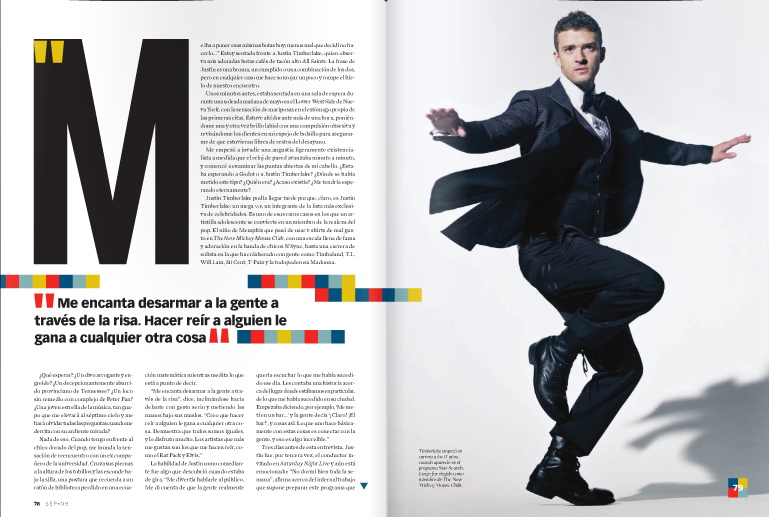 “I was going to wear those same boots today; I’m glad I decided against it…” I’m sitting opposite Justin Timberlake and he’s looking down at my current prized footwear, a brown, high-heeled All Saints number. It’s either a joke or he’s being cute, or a combination of the two, but in any case it’s made me blush a bit and broken the ice of our first meeting.

Just minutes before, I’d been sat in a waiting room on a sunny May morning on New York’s lower west side, experiencing butterflies of the first-date variety. I’d been waiting for over an hour, re-applying lip gloss with obsessive compulsion and repeatedly baring my teeth to my pocket mirror to examine and re-examine the territory for any rogue pieces of breakfast.

A little existentialist angst began to creep up on me as the wall clock jerked out one minute after the next, and I started to examine my split ends. Was I waiting for Godot, or for Justin Timberlake? Where was this guy? Who was he? Did he even exist? Would I be waiting forever?

Justin Timberlake could be late because he’s, well, Justin Timberlake; an A-lister with bells on. He’s the unlikely case of a teeny bopper remodeled into pop royalty; the kid from Memphis who went from bad shirts on the Mickey Mouse Club, to fame and adoration with boy-band N’Sync, to a solo career which has seen him collaborate with the likes of Timbaland, T.I., Will.i.am, 50 Cent and T-Pain as well as the mighty Madonna.

What to expect? An arrogant, conceited young diva? A disappointingly dull Tennessee hick? An inveterate nutter with a Peter Pan complex? A dashingly handsome young pop star who would sweep me off my feet and make me forget all my questions as I turn to jelly under the heat of his gaze?

None of the above. Meeting the golden-boy of pop, I’m washed over by a feeling of reuniting with the likes of an old college buddy. His legs are crossed at the ankle and thrust under his chair in a pose that recalls a geeky schoolboy lost in a math equation as he considers what he’s about to say.

“I love to disarm people through laughter,” he says, sitting forward in earnest, tucking his hand, palms facing down, under his thighs. “I would say making people laugh trumps everything. It shows everyone that we’re kind of on the same level, and I enjoy that experience. My favourite entertainers are the ones that can make me laugh, like the Rat Pack, and Elvis.”

His comedy skills were something he first began to discover when he was on tour. “I just enjoyed talking to the audience. I found that people really wanted to hear about what happened to me that day. I would just tell a story about their hometown or what happened to me in their hometown that day. I’d be like, “I went down to this bar…” and people’d be like “Yeeeaaayyyyyy! The bar!” – that type of thing. Basically what you’re doing is through those things is you’re just connecting people, and that’s an amazing thing.”

It’s been three days since he hosted his third Saturday Night Live show and he’s still reeling: “I didn’t really sleep the whole week,” he says of the ‘hellacious’ schedule of preparing one of the live shows.

Ambitious is not the word: when he’s not chirping out a tune or performing comedy skits, Timberlake is expanding his brand with multiple side-projects including a fashion line (William Rast), a record company (Tennman records), and two restaurants in New York. He’s also producing a show on MTV, has acted in a few movies, is a big sports fan (including golf and basketball) and has set up a couple of charitable foundations. Put that in the frame with 6 Grammys, 1 Emmy, two multi-platinum albums and you’ve got a gob-smacking portfolio of over-achievement that you feel tired just contemplating.

So what is it that really rocks his boat? Is it making people laugh, making them dance, or reducing them to screams of a sexual-hysterical frenzy? At mention of the latter, Timberlake automatically ejects a sheepish knee-jerk vindication: “The third one is too embarrassing to answer. I don’t know that I make them do that. Though there’s nothing wrong with excitement; I’ve been there before. I think young people are impressionable and excitable.”

The JT effect is palpable, and not just with young people. In the run up to my meeting with him, I was amazed at the number of females I knew that came out of the woodwork to inundate me with burning questions to pass on to Justin. “Ask him how things are going with Jessica Biel,” urged the OK readers among them, while the tireless conspiracists were stuck on the decade-old banality of whether he had or hadn’t popped Britney’s cherry. My younger female acquaintances put in autograph requests, while older girlfriends who should know better barely contained their excitement in demanding the details of how much time I’d have with him, what we were going to talk about, and most importantly of course, what I was going to wear.

He can turn a shy eye, but he can’t deny the adulation from his fan base. He admits, “There really isn’t a drug that meets the feeling of being able to do that, of being able to excite people.” Indeed, a decade and a half in pop has left a veritable trail of wet knickers and tear-stained pillows in its wake, but what’s impressive to Timberlake’s peers and elders is the way in which he’s managed to reshape his cutesy boy band origins into a respected music, and now comedy, career.

In December 2006, Timberlake teamed up with Saturday Night Live comedian Andy Samberg and transformed himself into a parody Casanova-style R&B loverman for the comedy skit, ‘Dick in a Box’. The video scored tens of thousands of views on the internet and even won an Emmy for its music and lyrics, as You Tube adherents the world over were startled by the implication that the singing, dancing Timberlake actually had a bit of a sense of humour on him too.

“That was the first time that I was able to do something to make people laugh that was equally as big as, for instance, my last album,” Justin recalls. “I want to show people that I’m (affects an English accent here) ‘not a nut-ta’; to say, ‘I invest in this just as much as you do, but I don’t believe all of it.’

“I have to say this too,” he continues after a brief moment of reflection, “I think Americans have finally learned what irony means. I don’t know if it has anything to do with the last eight years, of what’s happened to our country, but I think now more than ever Americans are willing to laugh at themselves.”

The run up to the 2008 US elections saw Justin Timberlake flexing his comic skills for a more hefty social issue: that of political change. He and his girlfriend Jessica Biel campaigned together in Nevada in October, speaking at a campus rally and filming infomercials for Barack Obama. He says of their unprecedented involvement in politics: “It was the first time we’d ever really done anything together, but we just believed in it and we thought it was for an amazing cause.”

He had been reluctant to involve himself at first: “I kind of sat back because I’ve never really endorsed a politician. I come from the mid-south and grew up with values like, ‘What do I know about politics?’ But I think this election was about young people realizing they had a voice and I knew that if I were part of the process, then somebody would talk about it.

“I met President Obama before he started running for the democratic election. It was probably one of the coolest meet-and-greets that I was ever a part of, the most un-politician-y handshake I’ve ever gotten from a politician. I was just really impressed with him,” says Timberlake of the Commander in Chief, with whom he recently shared a cover page entitled ‘How To Be A Man’ along with George Clooney in the US edition of Esquire.

“I didn’t know that you guys were doing that! I was very flattered!” he says of the three-part binding that allowed readers to interchange features of the men’s faces. “I used Barack Obama’s brow, my nose and Clooney’s chin and I thought, ‘Wow, this is an ugly human being!’ But that was good company to be part of.”

Like George Clooney, Timberlake has recently made a foray into the world of celebrity endorsments. Last year, he signed on with Parfums Givenchy to become the face of their new men’s fragrance, ‘Play’. The company had never before used a male celebrity to head up a campaign and as far as they were concerned hiring Justin Timberlake (the exact figure hasn’t been disclosed, but he don’t come cheap) was the ultimate gamble in times of recession and contracting budgets. Alain Lorenzo, Parfums Givenchy’s CEO, was ostensibly excited by his gambit:  “He’s also someone who takes risks,” he said of Timberlake, “and he’s one of the only young performers out there who gets up on stage in a three-piece suit; I like that.”

I start to wonder whether Timberlake’s actual motivation for taking the Givenchy gig was anything more than an astute business move; start him talking about it, and his tone shifts gears into an ambiguous mixture of denial (“Our first conversation was actually hilarious because I said, ‘I don’t even wear cologne; it’s kind of hard for me to be gung-ho about doing some support of fragrance.’”) and contractual scripted jargon (“I think fragrance is more like an accessory than a statement of who you are.”)

You get the sense that he’s not entirely comfortable with the position of being a celebrity endorser, a face stamped onto a product, and I wonder whether his state of denial (“I wasn’t so much interested in doing an endorsement, you know, being a pitch man for a fragrance – that’s not really my style.”) has to do with a fear of undermining his hard-won kudos.

But wait – what is Justin Timberlake actually afraid of? “My biggest fear is that I’m really not afraid of anything,” he answers, in the style of someone expertly skimming the question for a job interview. “I feel good about my life, but I don’t feel that winning a Grammy for instance is going to make me a better person.” So what is it that drives him then? What’s the source of his enormous success, his halo of achievement? Unparalleled drive and seething ambition? Excellent management and the exponential curve of cumulative success? A guardian angel?

Justin’s response is remarkably simple: “I feel like to be successful, in life as well as in a career, I think that it’s not a bad thing to expect good things to happen.”

Is that it? Positive thinking, plain and simple? It might seem a little tenuous to anyone who’s not Justin Timberlake or the author of a self-improvement book. But he is persistent: “After you have something in your grasp, to expect for it to be a good thing is not a bad thing.”

He makes it sound so easy.